ST. ANTHONY BREAD is a term used for offerings made in thanksgiving to God for blessings received through the prayers of St. Anthony.

Sometimes the alms are given for the education of priests. In some places parents also make a gift for the poor after placing a newborn child under the protection of St. Anthony.

It is a practice in some churches to bless small loaves of bread on the feast of St. Anthony and give them to those who want them.

Different legends or stories account for the donation of what is called St. Anthony Bread. By at least one account it goes back to 1263, when it is said a child drowned near the Basilica of St. Anthony which was still being built.

His mother promised that if the child was restored to her she would give for the poor an amount of corn equal to the child’s weight. Her prayer and promise were rewarded with the boy’s return to life.

Another reason for the practice is traced back to Louise Bouffier, a shopkeeper in Toulon, France.

A locksmith was prepared to break open her shop door after no key would open it. Bouffier asked the locksmith to try his keys one more time after she prayed and promised to give bread to the poor in honor of St. Anthony if the door would open without force.

The door then opened. After others received favors through the intercession of St. Anthony, they joined Louise Bouffier in founding the charity of St. Anthony Bread.

To make an offering to St. Anthony Bread in thanksgiving for blessings received, you may send your donation designated as St. Anthony Bread, to St. Anthony Messenger, 1615 Vine Street, Cincinnati, OH 45202. Your alms will be used to help the poor, especially those to whom the Franciscans minister. 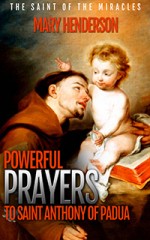 Powerful Prayers To Saint Anthony of Padua: The Saint of The Miracles

1 thought on “What Is St. Anthony Bread?”